An electric current is discharged through a gas-filled quartz tube, generating a hot plasma. This plasma radiates intense light which can be coupled into a laser crystal, optically exciting the laser medium. For Nd:YAG lasers, lamps filled with the noble gases Xenon and Krypton are frequently selected as they are most efficient at radiating wavelengths of light which are in the excitation spectrum of the Nd atoms and are readily absorbed by the Nd:YAG crystal. Flashlamps are operated in a pulsed mode; they discharge high current pulses (hundreds of amps) ranging in duration from .1 to 20.0 milliseconds. They are filled with either Krypton or Xenon: Krypton is more efficient at low currents and Xenon at high currents. Fill pressures are usually less than one atmosphere to help prevent explosions during the highly energetic current pulses.

At low power densities, Krypton filled lamps generate a spectral output that is efficiently matched to the Nd:YAG absorption spectrum. At higher power densities, Xenon becomes the more efficient fill gas. Traditionally, a Pulse Forming Network (PFN) of capacitors and inductors is used to generate the high current discharge. The PFN circuit is designed to match impedance with the flashlamp. The capacitors, (or capacitor bank) in series with the inductor(s) are charged and held across the map terminals. The impedance of the lamp prevents discharge until the lamp is ionized by the trigger pulse. The capacitor then discharges through the inductor and the lamp, generating a pulse of current and a burst of light. The capacitors can be charged and discharged repeatedly at high repetition rates to generate a steady stream of laser pulses. For improved reliability, stability and lamp lifetimes, a “simmer” process is employed. After the lamp is triggered, and between the subsequent current pulses, a steady DC current (typically .1-2.0 amps) is established and maintained by a separate power supply. The PFN is held off from discharging by SCR’s. A rate generator trips the SCR’s at the desired rate allowing the PFN to discharge through the lamp. Simmering eliminates the need to trigger the lamp for each pulse. This greatly improves pulse-to-pulse reliability and stability and also extends the life of the flashlamp. In recent years, solid state switching power supplies have begun replacing capacitor/inductor PFN’s in flashlamp pumped Nd:YAG lasers. Instead of charging and discharging a PFN, modern switching power supplies directly generate the current pulse. While PFN’s generate pulses which are shaped like half sine waves, switching power supplies can generate current pulses in a number of useful shapes: square waves, stepped, etc. The ability to shape the current pulse, and thus the laser pulse, has led to great improvements in Nd:YAG laser material processing. [one_half] 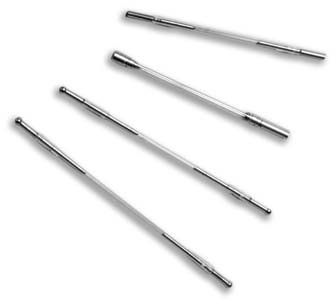 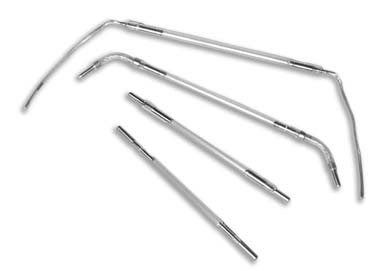 DC Arclamps are operated in a continuous wave (CW) mode and discharge a constant current in the 10-40 Amp range between 100-250 Volts. The continuous light radiated induces constant gain in the Nd:YAG rod, generating a continuous laser beam. Krypton gas is almost always selected for CW applications because it is more efficient than Xenon at these power levels; in fact, these lamps are universally known as Krypton arclamps. For increased efficiency, they are filled to very high pressures, typically 5-10 atmospheres. Violent explosions can result from mishandling, so safety glasses should be worn during handling and installation. These high pressures make Krypton arclamps difficult to start because of their high impedance. Therefore, fairly complex starting circuitry must be employed: first, a short duration (approximately one microsecond) high voltage (20-30kv) trigger pulse is applied to the lamp, which causes an initial ionization of the gas. Next, a boost circuit drives a low current through the lamp at moderate voltage for a few milliseconds after which the main power supply can take over and run the lamp at its normal operating current and voltage (typically 20 amps at 150 Volts).

Lamp envelopes are made from high quality quartz tubing. Naturally fused silica quartz is most commonly used, however, some solid state laser materials are excited by deep ultraviolet radiation, filtered by natural quartz. For these lasers, synthetic quartz tubing, which transmits deeper into the UV, is used. Nd:YAG lasers, on the other hand, are made from quartz tubing doped with cerium or titanium, which filter more UV than natural quartz. Arclamps usually employ thinner walled tubing (typically 0.5mm) for better heat transfer to the cooling fluid. Sometimes different sized tubes are fused together to create a lamp envelope with enhanced performance characteristics.

Anodes, the positive electrodes, are made from easily machinable thoriated tungsten which has an excellent ability to handle the thermal load created by receiving electrons from the current discharge. Cathodes, the negative electrodes, are some- times made from thoriated tungsten, however, for the cathode’s strenuous task of emitting electrons into the gas discharge, improved designs have been developed. For example, most laser lamp cathodes now incorporate chemically impregnated tips which reduce the work function at the cathode surface and subsequently reduce cathode “sputtering,” the major cause of lamp aging and failure. This chemical mixture generally contains barium, calcium and alumina; each lamp manufacturer has their own proprietary chemical recipe. These chemically impregnated cathodes require more difficult, higher temperature processing, but their higher cost is offset by longer lamp lifetimes. Since anodes are designed to receive electrons efficiently and cathodes are designed to emit the same, it is very important to install lamps in the proper polarity direction.

Quartz and tungsten have very different coef- ficients of thermal expansion, and cannot be directly fused because the difference would lead to strain and cracking failure. Inter- mediate joining materials are required to overcome this dilemma. Early lamp designs incorporated a soft solder quartz-to-metal joint which has the advantage of being thermally and mechanically rugged in operation. The process is fairly easily automated for repeatability, however, the solders used cannot tolerate the high temperature processing used to manufacture 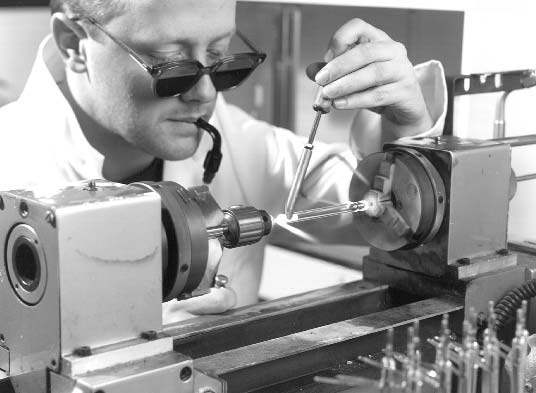 modern chemically impregnated cathodes. To overcome this limitation, “graded glass” seal technology was developed: a glass with a coefficient of thermal expansion in between that of quartz and tungsten is used to join the two dissimilar materials. The glass has a very high melting point so it can tolerate high temperature cathode processing easily but it is more fragile than traditional solder seal and cannot tolerate much mechanical strain. Furthermore, this type of seal does not easily lend itself to automation: skilled glassblowers individually hand craft graded glass seal lamps.

After the electrodes have been inspected and sealed into the quartz envelope, the lamps are processed in batches on multiport vacuum/gas- filling stations. The lamps are pumped down to a very high vacuum and processed at high temperatures using hydrogen torches and RF induction coils, driving any contaminant gases out of the lamp. They are then filled to the specified fill pressure with either Xenon or Krypton.

Lamps at a gas filling station

The electrical characteristics of each lamp are then checked to ensure that the lamps have been properly processed. After passing electrical inspection, the lamps are ready to have end connectors attached.

Lamps can be terminated with many different styles of connectors, depending on the laser system designer’s preference. The critical consideration is making sure the lamp can be installed in the laser head easily and without straining the glass-to-metal seals. Many different schemes have been developed to achieve this, including solid metal cylindrical lugs which can clip into spring fittings in the laser head. Flexible leadwires are another popular design. Some lamps connectors have built-in O-Ring grooves and others use a combination of flexible leadwires and solid terminal lugs for good strain relief and positive electrical connection.