In any CO2 system, mirrors are among the most critical components. The design and manufacturing quality of the laser’s mirrors are crucial to generating, maintaining and delivering a high-quality laser beam. There are two main categories of laser mirrors: internal and external.

External mirrors are used to deliver, manipulate, split and focus the laser beam. Most mirrors have flat reflective surfaces, but some have curved surfaces designed to reduce beam divergence. The design of the substrate material and coating of a CO2 laser mirror is primarily determined by its intended function.

Windows are used in some systems as the primary vacuum seal after the front mirror or to separate an oscillator and amplifier. They are typically simple, flat-parallel or flat-wedged optics made from transmissive substrates with antireflective coatings on both the inside and the outside surfaces.

Output couplers, also known as front mirrors, are designed to reflect a portion of the beam back into the laser resonator for continuous amplification while transmitting a portion of the beam to the outside for use. Therefore, the substrate material must be transmissive at the required wavelength of 10.6μ. Germanium and Gallium Arsenide substrates are commonly used for low to medium powered systems. The more expensive Zinc Selenide material is required for higher- powered lasers because of its lower absorption at 10.6 microns.

The outside surface usually has an antireflective coating for improved transmission efficiency. The inside surface usually has a partially reflective coating to reflect a percentage of the beam back into the resonator. However, some materials are naturally partially reflective when polished and left uncoated. For instance, polished, uncoated GaAs and ZnSe are sometimes used as output couplers because they have natural reflectivities of 27% and 17% respectively. 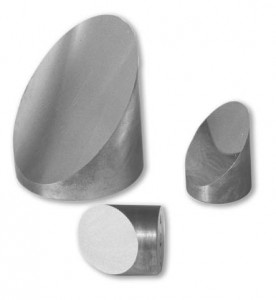 Beamsplitters are used to simultaneously deliver one laser beam to two or more workstations. This is achieved by transmitting a portion of the beam while reflecting the remainder (usually at 90o). A split ratio of 50/50 is most common; however, other ratios are available. When ordering a beamsplitter, the beam’s polarization must be specified: S, P, Average, or S and P.

Parabolic focusing mirrors are used on
very high-power lasers when focusing
lenses are impractical. They are usually
made from solid copper substrates because
of copper’s good thermal properties and
can be used coated or uncoated. The coating is an enhanced dielectric and is used if maximum reflectivity is required. They are usually left uncoated if the application is in a dirty environment and repeated cleanings are required.

Corner or fold mirrors are used to lengthen the resonator beam path to increase gain/power without physically lengthening the entire system. They are usually made from inexpensive silicon substrates and have highly reflective coatings. Enhanced or protected silver or gold and multilayer dielectric coatings are typical. In very high-power systems, copper substrates are used because of copper’s superior thermal conductivity.

Rear mirrors are designed to reflect all or nearly all of a laser beam back through the laser gas mixture for amplification. The inside surface is given a highly reflective (99-100%) coating. In the 100% reflective case, inexpensive silicon can be used as the substrate material and the outside surface does not need polishing or coating. Some rear mirrors, however, are designed to transmit a small (0.5 – 1.0%) percentage of the beam to a power detector for real-time beam monitoring. These mirrors must have a transmissive substrate (Ge is the most common) and the outside surface usually has an antireflective coating.

 Circular polarizing mirrors are a special type of bending mirror which convert a linearly polarized beam into a circularly polarized beam. Simply speaking, every laser beam has an associated electric field. The orientation of this electric field with respect to the direction of beam propagation can greatly affect how the focused beam cuts or welds a given material. In most CO2 laser systems, the electric field of the output beam is oriented in a plane at 45o from the horizontal or vertical. This is known as ‘S’ or ‘P’ linear polarization. A linearly polarized beam will interact differently with the work material depending on the direction of travel. For instance, it may cut nicely in the X direction but yield excessive burring or a nonperpendicular kerf in the Y direction. For consistent cutting or welding in all directions, a circularly polarized beam is required. Quarter-wave and eighth-wave circular polarizing mirrors were developed for this purpose.

For CO2 lasers, several substrate materials are available. Silicon is used on low to medium power systems when cost is a big consideration. Copper, with its superior thermal conductivity is used for very high-powered systems. Molybdenum is used in dirty environments where durability and repeated cleanings are required.

Historically, coatings of enhanced and protected gold or silver were the industry standards. In recent years, however, enhanced multilayer dielectric coatings have been developed offering higher reflectivities and greater durability. These coatings are becoming increasingly popular.