In any Nd:YAG laser system, mirrors are among the most critical components. The design and manufacturing quality of the laser’s mirrors are crucial to generating, maintaining and delivering a high quality laser beam. There are two main categories of laser mirrors: internal and external. Internal mirrors, also known as “resonator” or “cavity” mirrors, are used to generate, maintain and amplify the laser beam by forming a reflective “resonator” around the Nd:YAG crystal. External mirrors are used to deliver the laser beam. Most mirrors have flat reflective surfaces, but some have curved surfaces designed to reduce beam divergence. The design of the substrate material and coating of an Nd:YAG laser mirror is primarily determined by its intended function.

How They Work: Internal Mirrors

Output couplers, also known as front mirrors, are designed to reflect a portion of the beam back into the laser resonator for continuous amplification while transmitting another part of the beam to the outside for use. Therefore, the substrate material must be transmissive at the required wavelength of 1.06μ. Pyrex and BK7 glass can be used for low power systems, how- ever, Directed Light specifies only high quality fused silica for Nd:YAG front mirrors. Fused silica has better optical and thermal properties than glass and yields better durability and lifetime.

Rear mirrors are designed to reflect all or nearly all of a laser beam back through the laser crystal for amplification. The inside surface is given a highly reflective (99% to nearly 100%) coating. In the nearly 100% reflective case, the outside surface does not need to be polished or coated. Some rear mirrors, however, are designed to transmit a small percentage (0.5%-1.0%) of the beam to a power detector for real time power monitoring. These mirrors must have a transmissive substrate, and the outside surface is usually polished and anti-reflective coated. Fused silica or less expensive BK7 glass substrates can be used in either case, since the thermal load of 1.0% transmission is very small. 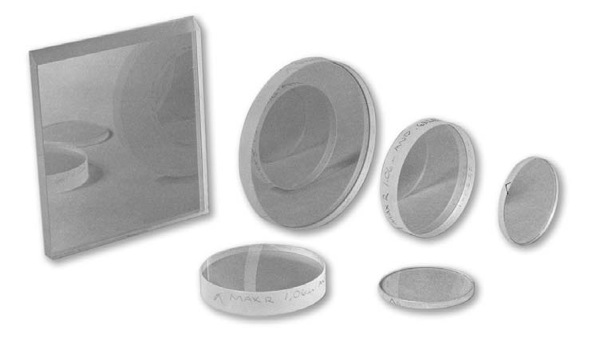 Bending mirrors are used to direct the laser beam towards the work piece. A 90o bend (45o angle of incidence) is most common, but other angles can be used. With careful coating design, reflectivities approaching 100% at the desired wavelength are common. Because the dielectric coatings on the front surface reflect nearly 100% of the laser beam, the thermal properties of the substrate material are not critical. Some beam delivery systems, however, are designed to allow a camera to view the workpiece through the backside of the bending mirror. In this case, the substrate must be transmissive in the visible spectrum and typically a broad band anti-reflective (BBAR) coating is applied to the backside for improved visible transmission and camera imaging. Fused silica and BK7 are the most commonly used substrate materials.[/one_half][one_half_last] Dichroic mirrors, as their name implies, are designed to reflect two colors, or wavelengths of light. Many Nd:YAG laser systems incorporate a HeNe laser for aligning the beam and locating the focused spot. These systems must use dichroic bending mirrors which reflect both the Nd:YAG wavelength (1.06μ) and the red HeNe wavelength (0.632μ). Due to design constraints, reflectivity can only be maximized at one wavelength. Therefore, Nd:YAG dichroic mirrors are usually designed for maximum reflectivity (nearly 100%) at the Nd:YAG wavelength and best effort high reflectivity (usually 80%-90%) at the HeNe wavelength. The coatings on Directed Light’s bending and dichroic mirrors are multilayer dielectrics which are highly efficient and durable. They have damage thresholds of 5 Gigawatts per square centimeter.