A Bright Spot during the International Year of Light

Laser Editorials, Lasers in the News|By Michelle on December 28th, 2015

The worldwide market for lasers in 2015 was steady in terms of overall revenue growth in 2015 according to Allen Nogee, a Senior Analyst at Strategies Unlimited and an expert on photonics markets. While in early 2015 he predicted a growth rate of 6.6 percent over 2014, Nogee is finishing up the year with an estimate (based on data up to the third quarter) of 5.0 percent over all laser markets, beating global economic growth of 3.3 percent but lower than the US stock market for the same period. This, after the US and Europe started the year off well, but fizzled a bit as we move toward the end of the year. However, when you focus on the industrial laser category, the news is rosier and closer to predictions, with growth in revenue compared to 2014 estimated to be 6.5 percent (see Figure 1 for industrial laser revenues). 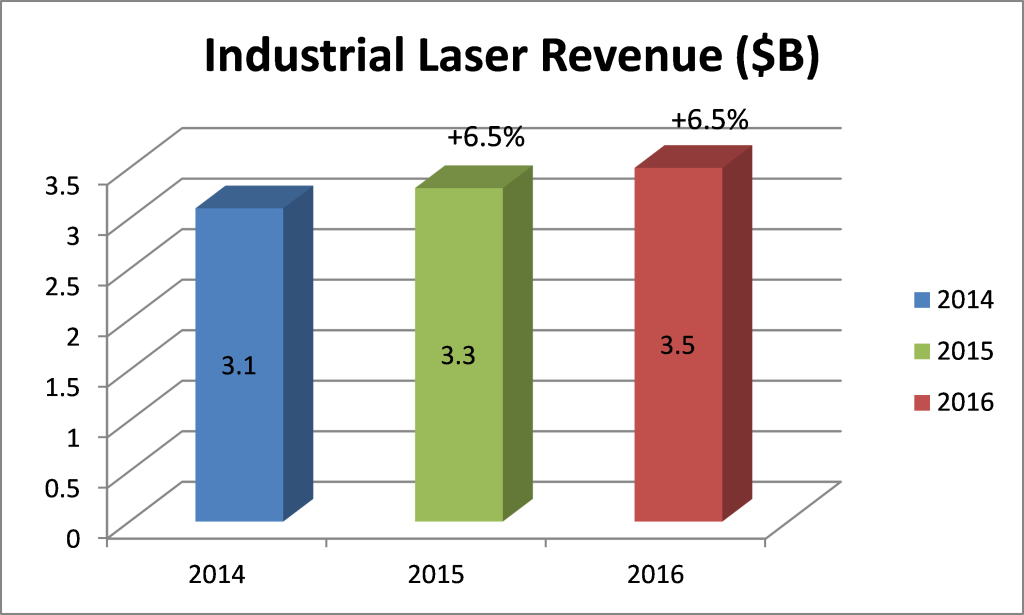 “Revenue increase over last year in the EU for industrial lasers was 5.5 percent, while in the US it was ~ 6 percent, but keep in mind there were drastic currency changes this year which negatively impacted American companies and helped EU companies because the dollar went up relative to the Euro. Many US companies are complaining that the headwinds from the currency were 6 percent, 7 percent and even 10 percent depending upon when sales occurred.”  At the same time Asia, particularly China, fared pretty well to keep things moving along at a steady rate.

Industrial Laser Market Details
Big events in the 2015 worldwide economy including currency fluctuations and shocks in the Chinese market did surprisingly little to dampen industrial laser sales. Those factors were probably mitigated by a stabilized US economy and strong government support of advanced technologies in China.  With respect to manufacturing in general, “There was a lot of doom and gloom in the industrial sector in the non-laser, manufacturing area, and I haven’t seen that in lasers. Lasers are a tool, often replacing another tool, and new applications are coming about and prices are decreasing. Taking it all into account, that may be cushioning some of the ups and downs (for laser revenues) you usually see in other types of machine tool sales.” As for China, it is likely that the money from China’s government to support laser research, particularly oriented towards developing China into a high-tech manufacturing country, has been increasing over the past couple of years.  As Nogee points out, “Ultimately, China wants to get out of manufacturing the low-value, cheap stuff, and wants to be world-class in manufacturing high-value, high quality products.” A key to doing this is to focus on laser material processing.

Industrial lasers make up nearly one third of the overall laser revenues and include marking, micro-processing and macro-processing lasers. In terms of those categories, laser revenues for bigger (macro-processing) lasers did better, smaller (micro-processing) lasers did worse, and marking lasers didn’t do so well. Bright spots were fiber laser revenues and growth in the sales of lasers for additive manufacturing. According to Nogee, fiber lasers continued to lead the way in macro-processing laser sales growth, noting that “during 2015, fiber lasers accounted for well over 50 percent of all of the higher power laser sales; this, when they held only about 20 percent of the market just a few years ago. You have [fiber laser] prices decreasing, which means actually things were really pretty good; if you didn’t have the decrease in prices, this year’s numbers would have been even better.”

Emerging Laser Technologies
This year, Nogee spent time looking at a class of lasers that has traditionally been used mainly in research labs, but over recent years has found increasing numbers of applications in medical and industrial applications. Known as ‘ultrafast lasers’ – lasers with pulse durations in the femtosecond to picosecond range, these types of lasers are starting to be used in micro-materials processing.  According to Nogee, the size of the market has been a big mystery out there. “The guesses I heard were usually on the low end of what I ended up finding, which is about $850M for research, medical and industrial ultrafast lasers. Prices have been dropping, but are still out of line with the applications. A lot of these applications are very specific; ultrafast lasers are not a generalized tool where everyone has to have a lot of them to get the job done.”  Of note in this area, fiber lasers are making increasing inroads in this category by replacing primarily DPSS lasers, similar to what they have done in macro-materials processing applications where CW, kW-level fiber lasers have been displacing CO2 lasers and DPSS lasers.  However, the precision material processing area is slowing down the most. Smart phone manufacturing has cooled, and doesn’t look likely to grow again very soon.

Another type of laser is making headway. Nogee notes that, “like fiber lasers, semiconductor lasers have been doing well. So-called direct-diode, high power lasers are so much more reliable than CO2 and don’t need gas, so it is sort of like going from tube TVs to flat panel TVs or tube radios to solid state radios – the prices drop and they become ultra-reliable, and you will see more applications.” As an example of how diode lasers are impacting a non-industrial application, “If you look at just the last few years in the light show area, it went from solid state lasers to diode lasers, and prices are 10 percent of what they used to be. I’ve noticed that they [lasers] are being used in ‘Dancing with the Stars’ and every award show.”

And in the area of additive manufacturing (also known as ‘3D printing’), companies who sell lasers into this market estimate a robust 46 percent growth in 2015 sales. This must be tempered with concern that many of the major laser system manufacturing companies have had their stocks drop to under 25 percent of their price compared to last year.

While the industrial laser area has been steady, Nogee notes incredible innovations that are likely to lead to strong growth in areas such as medical lasers and sensors. In the medical arena, “they are starting to do laser surgery through a fiber while using the same fiber to do spectroscopy of what they are lasing during the surgery. As an example (www.bbc.com/news/health-34041863) brain surgery can be done with fiber as the scalpel while actually analyzing the material that the laser has cut, so that the surgeon can excise the tumor but stop cutting when they get to normal brain tissue.” And in sensors, according to Nogee “LIDAR has gotten cheaper; Google uses $80,000 systems on their cars, but there is a company coming out with a $1000 version for production vehicles with no moving parts that works in every direction. That technology is coming out of start-ups in CA, where self-driving cars are permitted. Most of those cars have radar and cameras, but they still need the LIDAR to put a solid distance on things, and I expect that they will probably be required.”

What is Next?
So, how are things shaping up for 2016? Nogee says he thinks we are in a good place with slow but stable growth that will continue in the overall laser market.  As long as nothing extreme happens such as terrorism or unexpected economic turmoil causing uncertainty, Nogee’s prediction for 2016 is for a similar growth rate for industrial lasers to 2015 of 6.5 percent. This number could be revised based on fourth quarter data, but for now, the International Year of Light will likely be followed by another year of steady growth – something to celebrate in an often turbulent world.